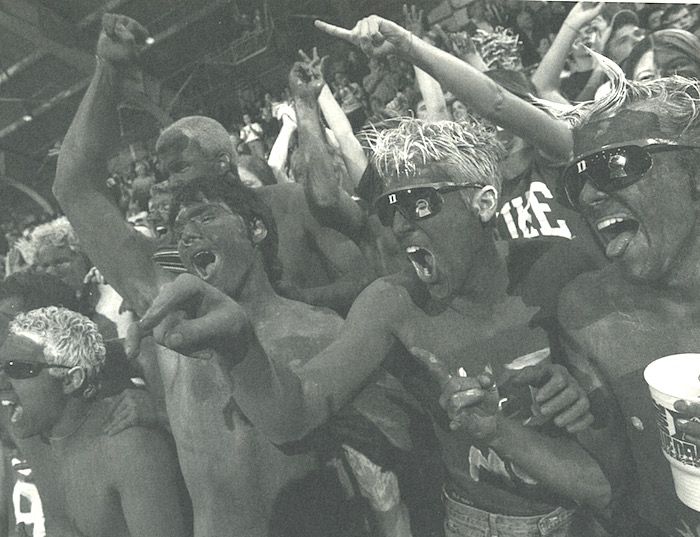 by Duncan Murrell
Southern Cultures, Vol. 12, No. 2: The Tobacco Issue

"The Dukes linked sex and the cigarette, which was audacious not only because they were abstemious Methodists but because there's no earthly reason burning a foul weed in your mouth ought to invoke the pleasures of sex. And yet it does."

The monument to James Buchanan “Buck” Duke stands in front of the English Gothic chapel that Buck himself laid out at the center of the university he built and which bears his name. The tower of the chapel is 210-feet high and the nave seats 1,470 people. It is like no other church anywhere in North Carolina tobacco country. Buck’s statue stands erect, fingers on a cane, all six buttons of his waistcoat buttoned and tight against his paunch. In his left hand he’s burning a cigar, although by rights he should be holding a cigarette, the poor man’s accessory, which he manufactured by the billions.

There’s a memorial chapel to the left of the chancel of the main chapel, and in this smaller chapel rest the sarcophagi of Buck, his brother Ben, and his father, Washington “Wash” Duke. Each of them lies head to toe, carved in glowing white marble and covered in stony drapes like three home-grown Caesars. Buck looks a little like Augustus, thin and angular, nothing like the triumphant gargantua holding his cigar just a hundred yards away; a sarcophagus and the finest marble cannot hide the transformations of old age and death.

"Those who complain often don't come back": Stories of Migrant Life