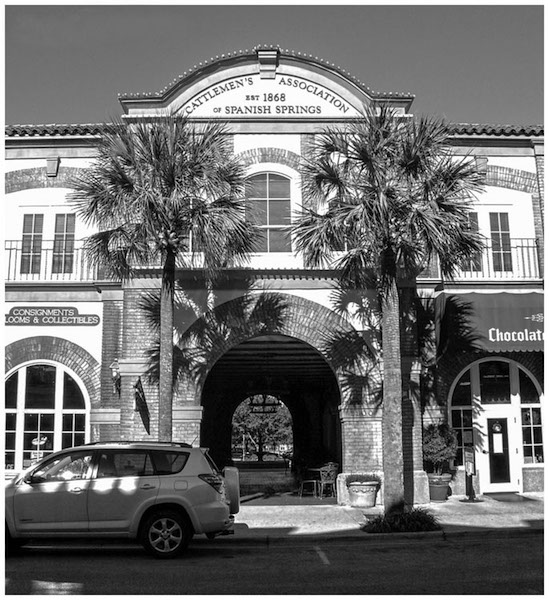 The building that houses a Kilwin’s Chocolate chain and a collectibles stores is labeled the “Cattlemen’s Association of Spanish Springs,” complete with a prominent “Est. 1868” sign. All photos courtesy of Amanda M. Brian, December 2010.

The Villages, a planned retirement community, lies about an hour’s drive northwest of Orlando in the lake-studded landscape of central Florida. Imagine one of its community members—a Villager—enjoying a stroll on a warm day in Lake Sumter Landing, one of three distinct downtowns that cater to approximately 90,000 residents. This average Villager—at least fifty-five years old, not from Florida, relatively affluent, white, and likely female—stops for an ice cream cone at the Häagen Dazs store just off the central square. A historical plaque, common on most of The Villages’ storefronts, states that Oscar’s Bait & Tackle once occupied the building. The Villager learns from the plaque’s author, the Lake Sumter Landing Historical Preservation League, that Oscar Feliu purchased the “small warehouse building on the waterfront” in 1906 and ran a “successful fishing equipment and bait shop for the many sportsmen who came to Lake Sumter to enjoy the outstanding fishing available in the area.” There’s more to the story next door. The old telegraph office, now a radio station, displays what appears to be an early-twentieth-century photograph of townsfolk— well-dressed men, women, and children—gathered outside Oscar’s to glimpse record-setting fish caught in the lake.