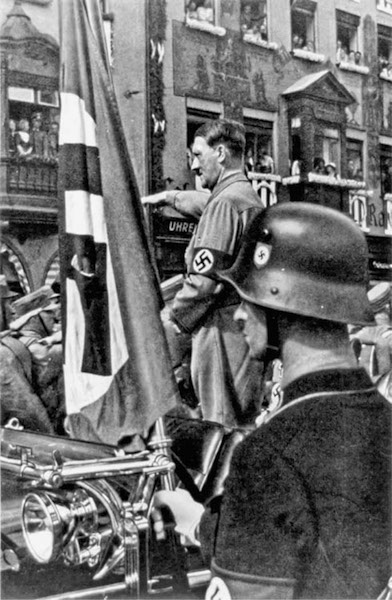 Adolf Hitler, Nuremberg, halftone photomechanical reproduction print from cigarette card, courtesy of the collections of the Library of Congress.

"In the immediate postwar period, as though sensing that the revulsion from Nazism might be carried too far, senators from the South defied the American Creed. They opposed the campaign to sign the Genocide Convention, for example, which the United Nations had adopted n 1948."

In 1944 the Carnegie Corporation of New York sponsored the publication of a landmark study, with which historians of race relations in the United States are very familiar: An American Dilemma. Economist Gunnar Myrdal, a Swede, had been selected to direct the project and write the study because his nation had no heritage of slavery, colonialism, or imperialism; therefore his impartiality could be presumed. In mid-century America the Carnegie Corporation could not have conceived of assigning the project to an African American scholar—like W. E. B. Du Bois, who actually knew something about the subject, the fruit of a lifetime’s study and experience. But Myrdal’s comprehensive study—the book weighed in at over one thousand pages, with ten appendices and two-hundred and fifty pages of notes—set in motion the acute awareness of the disjunction between democratic ideals and Jim Crow. Exactly a decade later, the unanimous Supreme Court decision of Brown v. Board of Education would acknowledge a terrible historic injustice. Its footnote #11, in citing An American Dilemma, served as a justification for outlawing racial segregation in public schools, which violated what Myrdal called the American Creed of egalitarianism.