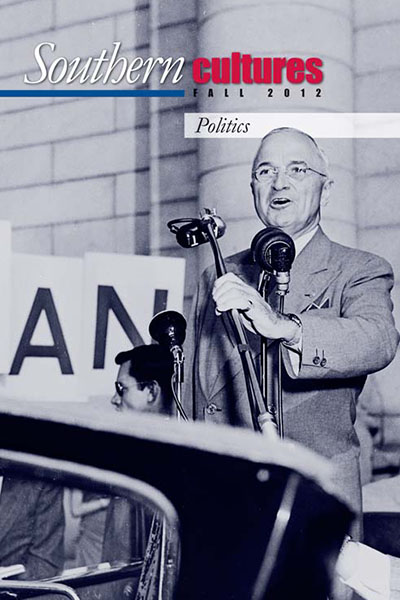 For our special 2012 election-year Politics issue: Ferrel Guillory on Five Big Things You Need to Know About the South for the Election. The Past, Present, and Future of Southern Politics. Jack Bass on Citizens United, Strom Thurmond, the Southern Strategy, and Jackie O. Control of Public Schools and the Politics of Desegregation. Stephen J. Whitfield on the South in the Shadow of Nazism. Documenting the Immigration Debate Today. Bill Clinton on . . . Bill Clinton.

"Next to football and religion, politics might well be southerners' favorite sport."

"Politically, the South is not an assembly of states, acting in unison, in the grip of one party. The region is not one South, undivided."

"Of all the women ever romantically linked to Strom Thurmond, none was as deadly as Sue Logue. The judge who sentenced her to the electric chair for murder called her crime 'the most cold-blooded in the history of the state.'"

"You can't be defensive about it. You don't apologize for it."

"The bill gained quick notoriety for outdoing Arizona, Georgia, and all other states in the restrictions and penalties levied on unauthorized immigrants, as well as on the citizens, community members, employers, and health and law enforcement agencies that assist, employ, or regulate them."

"In the immediate postwar period, as though sensing that the revulsion from Nazism might be carried too far, senators from the South defied the American Creed. They opposed the campaign to sign the Genocide Convention, for example, which the United Nations had adopted n 1948."

"The apparent partisan stability of contemporary southern politics belies a complex and dynamic process that makes it doubtful one party can persist as the dominant force in the most diverse region of the United States . . . This truly ain't your daddy's Dixie."