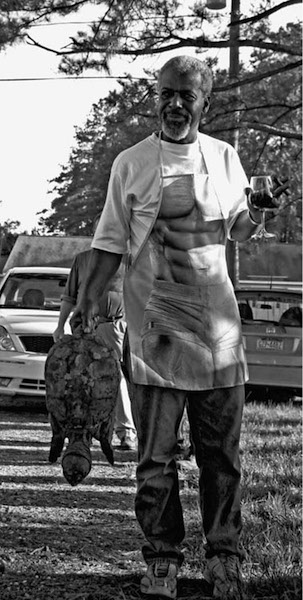 Two events mark the fall social season on the lower Eastern Shore of Virginia—H. M. Arnold’s Bayford Oyster House Bash and Theodore Peed’s Turtle Party. Venison barbecue anchors the late September menu at Bayford; an array of snapping turtle dishes, including fried turtle with “50 weight gravy,” tempt the attendees at Peed’s. Potluck dishes, savory and sweet, supplement the spread. For several years the two events occurred on succeeding weekends, but the stamina required for attending both, much less hosting them, exceeded the energies and dedication of all but the passionately committed. Eventually Arnold and Peed, longtime friends, agreed to a longer recuperative interval. On a bright, warm, windy morning in the changing days of mid-October, 2010, and three weeks after the Bayford Bash, Peed and his family were deep into turtle party preparations.