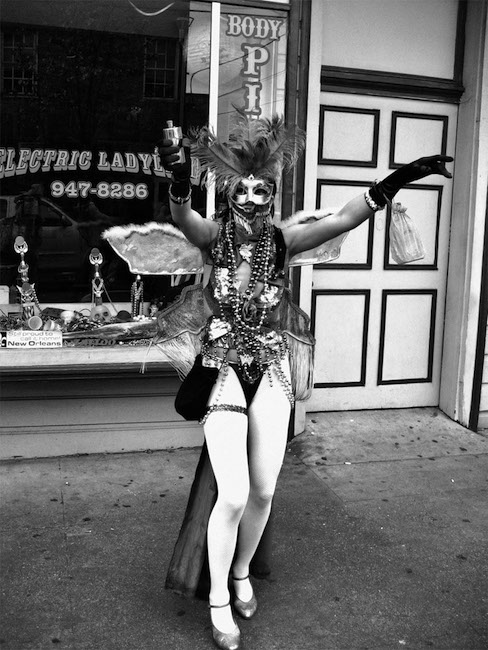 "The New Orleans Times-Picayune argued it was 'fortunate that being naked in other cities doesn't produce the same je ne sais quoi as stripping on a Bourbon Street balcony. Otherwise the tourism revenue we count on from Carnival might remain locked in coffers not our own.'"

There was not much color in Aggieland—at least not other than the maroon proudly flaunted by students at Texas A&M University. A month had passed since Hurricane Katrina devastated my hometown of New Orleans. Eager for a distraction from the daily news reports that told of more destruction and death, I decided to attend a concert in a very big country dance hall called the Texas Hall of Fame. The music was twang, the beer was Lone Star, the walls were purely Aggie. Or so I thought at first glance. As I wandered around the large hall absorbing Central Texas culture, I noticed a much more familiar color scheme. The back wall bore no signs declaring “Gig ’em,” paintings of spurred Corps of Cadets boots, or even photographs of the Texas A&M football team. Not even maroon graced the wall. Instead a mural depicting purple, green, and gold confetti, Carnival masks, a Bourbon Street sign, and the words “New Orleans” stretched across the room. I had discovered, in a most unexpected place, a little bit of home.

When Trees Are Dying