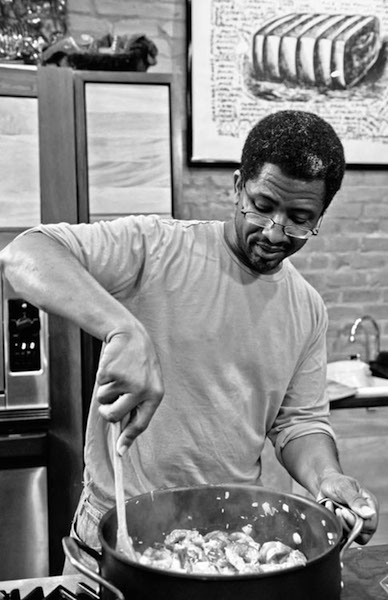 "I see the participatory nature of food in New Orleans as being in the dishes. My guess is that none of the fine chefs in town would accept the challenge of putting their gumbo against somebody's mother's gumbo."

New Orleans native Lolis Eric Elie has worked as a journalist for decades. A former columnist for the Times-Picayune, writer and co-producer of the PBS documentary Faubourg Tremé: The Untold Story of Black New Orleans (2008), and author of Smokestack Lightning: Adventures in the Heart of Barbecue Country (2005), Elie is now a story editor on the HBO series Treme. His work has appeared in, among others, the New York Times, Washington Post, Gourmet, and the Oxford American. A conversation with Elie makes it abundantly clear that his favorite subject, food, is not only a passion of the palate, but a lens through which the writer approaches cultural analysis and place-based storytelling. Food, he says, is synonymous with identity. This is particularly true in a city with such love of the table as New Orleans. Elie has been largely responsible for the strong role food plays in Treme, drawing upon his longtime involvement with the Southern Foodways Alliance and previous journalistic work. In our interview, Elie spoke candidly about the importance of food after Katrina, New Orleans versus the South, oral history as vital to reclaiming “vernacular” food traditions, and claimed that his gumbo could go head to head with that of his hometown’s best chefs.