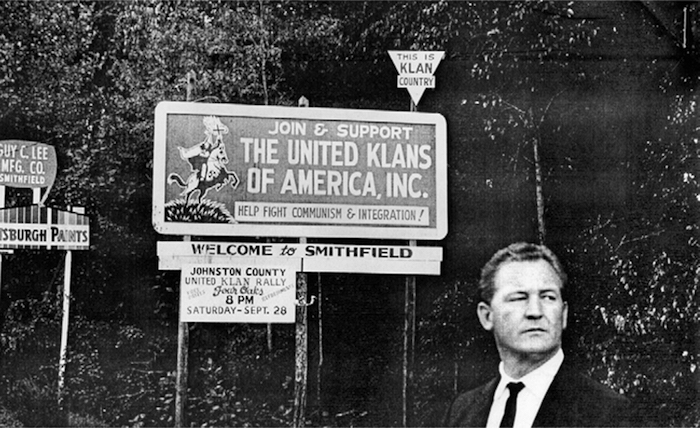 Billy Flowers, an Exalted Cyclops of the Johnston County chapter of the UKA, stands in front of his billboard on the outskirts of Smithfield, North Carolina, photographed by Pete Young, courtesy of the Lyndon Baines Johnson Presidential Library.

"The drive for minimal justice on behalf of black people had come to this: the ordinary white people of the South . . .on the edge of a collective nervous breakdown composed in roughly equal parts of ignorance, rage, and paranoia."

On June 21, 2005, exactly forty-one years after the murder of Civil Rights workers James Chaney, Michael Schwerner, and Andrew Goodman in Neshoba County, Mississippi, former Ku Klux Klan member Edgar Ray Killen was convicted on manslaughter charges for those crimes. The national press widely framed the outcome of his high-profile trial as belated justice served, as well as a vehicle for broader closure and redemption for the community. But, for a crime allegedly perpetrated by at least twenty-one people—including the county Sheriff, who had openly, and successfully, campaigned on his ability to sternly “cope” with the state’s influx of “racial agitators”—not everyone found the verdict entirely satisfying. David Dennis, who was a central figure in the 1964 Freedom Summer project that had brought Schwerner and Goodman to Mississippi, has consistently argued that the murders were, in truth, a statewide conspiracy to deny basic rights to African Americans. Ben Chaney, James’s brother, similarly spoke of the need to recognize that “rich and powerful” elements associated with the plot continue to escape the reach of the law. Voices in the activist legal community have echoed this call, referring to these far-reaching networks of culpability as the “matrix of involvement.”