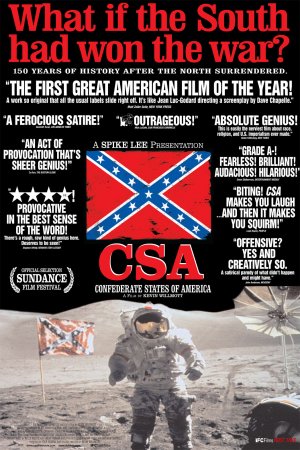 "Are blacks to be proud of the film? Or is it just an expansive, self-indulgent joke that goes on too long?"

C.S.A.: The Confederate States of America, conceived and filmed by Kevin Willmott and presented by Spike Lee, is a mockumentary—that is, a film designed to spoof various historical television documentaries, especially work in the vein of that of Ken Burns. An extended contemplation of what it would have meant to the western hemisphere if the American South had won the Civil War, C.S.A. was ostensibly made by a British company and is replete with the requisite commercials of a television production. These are sometimes as innocuous as the one featuring a father who protects his family with Confederate Insurance and as insidious as the one advertising a bracelet designed to let modern day paddyrollers know the exact location of any “buck” who dares to run away.