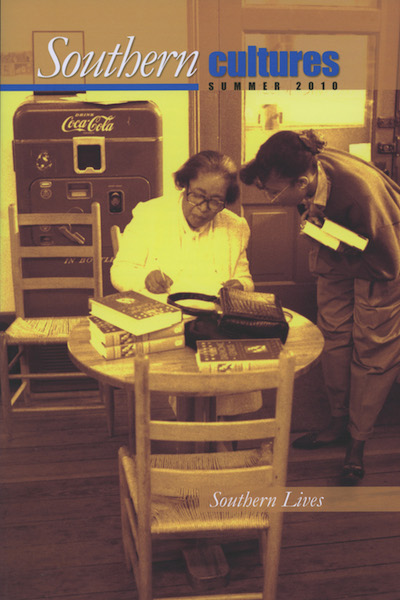 As Harry L. Watson puts it, “If there are truly many Souths, there must be many kinds of southerners.” In this issue, we take a look at many Southern Lives: Bill Carter dresses for all occasions; Virginia Foster Durr opens her home to recently released inmates; Michael McFee tours the Billy Graham Library; Septima Poinsette Clark celebrates fellow Civil Rights pioneers; Albert Murray goes on the record about Ralph Ellison’s style; and Margaret Walker Alexander reveals her take on Langston Hughes, Toni Morrison, and Alice Walker.

"Stereotypes from Dixie crowd American fiction, film, music, and consciousness, and we all know people who seem to fit one of the molds."

Becoming Billy Carter: Clothes Make the Man (and His Many Characters)

"The regulars at the station had great fun with the press. The station was home to some of the greatest liars and bullshit artists in the history of the world, and tabloid reporters were nothing more than a light snack before lunch for them."

This article first appeared in vol. 16, no. 2 (Summer 2010) and is excerpted here. To access the full article, visit Project MUSE.

“My Idol Was Langston Hughes”: The Poet, the Renaissance, and Their Enduring Influence

"As a small child in the 1920s, I was very much affected by the Harlem Renaissance. As early as age eleven, I had read poetry by Langston Hughes."

Just As I Am Not: A Poet Visits the Billy Graham Library

"Do they keep an eye out for the possible wayward soul (like, say, a middle-aged guy with scraggly graying hair who stays at the margins of the group and keeps scribbling in a little black book) and hope—no, pray—that the cheerful performance of their duties and the powerful unfolding of Billy Graham's life and message might lead this poor lost person to accept Jesus Christ as his personal Lord and Savior?"

"So, you get up and pilfer a cigarette from your lover's pack, smoke it in blue moonlight pushing through the bare kitchen window. Someone is listening."

by David A. Taylor

"'In America they get away from race by saying 'minority.' But who the hell's the best minority in the world? The hero! You know what I'm saying? That's always a minority.'"