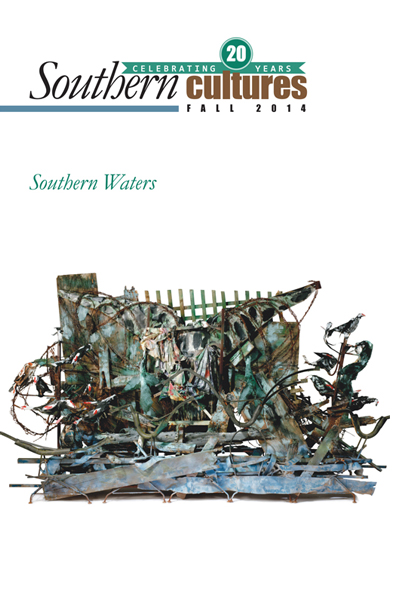 Water, water, everywhere . . . The Fall 2014 Issue explores Southern Waters. From mullet fishing on Brown’s Island to shrimping on the Gulf Coast after the BP Oil disaster, from recreation on the Great Lakes of the South to coastal tourism in the Sunbelt and tramping in the swampy lowlands of eastern North Carolina, we take a look at tourism’s vital role in regional economies and the challenges of conservation and sustainability.

"[T]his issue is about southern water, the vital fluid that shapes its land, contours, and boundaries, brings it life, and makes it livable. An early traveler to Carolina called it a "watry Country," and so it remains, its liquid and solid selves each depending on the other and each indispensable in giving place its character."

For the 10th anniversary of the BP Oil Spill and the 50th anniversary of Earth Day, we share Andy Horowitz's 2014 article, which includes oral histories with those directly impacted by the environmental disaster around Empire, Louisiana. As resident Karen Hopkins told Horowitz in an interview, "Protect what you have while you have it and don’t be afraid to fight. Don’t be afraid to ask the questions, demand the truth. It doesn’t matter if you look like an idiot screaming in the street. If someone hears you, it’s worth it."

"Call this a first draft of tomorrow's history of today's South—one that places the coast at the center of the story and seeks to understand how beaches came to reflect and influence broader changes in the region's cultures and political economy."

Fish Tales and the Conservation State

"Whose land was condemned; who was displaced? What did all the shoals look like when the lilies bloomed? And . . . what would it be like to witness the great shad migrations and fishing parties of the past?"

The art works represented here are housed in the Souls Grown Deep Foundation. William Arnett, the Foundation’s founder, assembled the collection over a thirty-year period, during which he travelled throughout the South and interviewed the artists. Arnett selected the artworks illustrated here, offering a commentary on each one in a recorded conversation in 2013. In the same year, he made arrangements for housing the Souls Grown Deep Archive in the Southern Folklife Collection at the University of North Carolina at Chapel Hill.

In the Lowlands Low: Swamping About the South

"At every turn in this country, there was a branch, a slough, a poquoson, a swamp, and most of us sensed that we did not simply live near swamp—we belonged to it."

“It’s Easier to Pick a Tourist Than It Is a Bale of Cotton”: The Rise of Recreation on the Great Lakes of the South

"In May 1933, the United States government enacted legislation establishing the Tennessee Valley Authority. Within several decades, the TVA's construction of dams in pursuit of its goals transformed a millennia-old network of free-flowing rivers into a chain of slow-moving reservoirs creating a new landscape or, more properly, a new lakescape."

This essay is excerpted from the Southern Waters issue (vol. 20, no. 3). To view in full, please access via Project Muse.