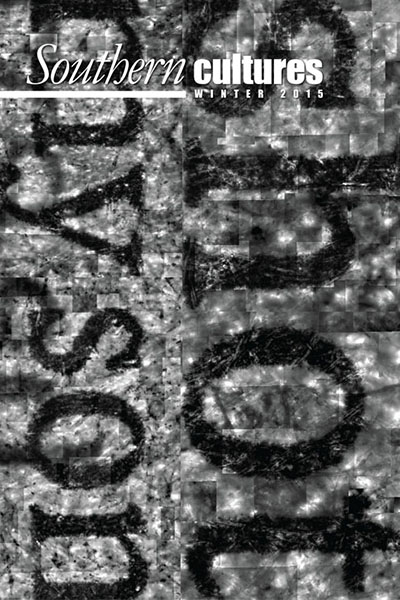 The past is never dead. On the anniversaries of Lee’s surrender at Appomattox, the release of The Birth of a Nation, and Ken Burns’s The Civil War, as well as in the Atlanta child murders of 1979–81 and a first-person account of school integration, we see historical tensions that resonate today. We also look at a disappearing tobacco culture in photos and poetry, investigate what’s really behind the nickname “Tar Heel,” and join antebellum southern travelers on their visits north.

“If the articles in this issue resonate with recent events, it’s less a choice or a coincidence than a sharp reminder that enduring themes in southern culture do not easily fade.”

“People see in the events at Appomattox what they want to see: testimony to Americans’ shared greatness or testimony to promises unfulfilled. Both of those things are real.”

“[B]y emphasizing military conflict over political debate, by privileging valor over ideology, and by accentuating white heroism over black activism, the Foote–Burns interpretation of the Civil War gave PBS’s mainstream American audience something to feel good about.”

“What, finally, do we make of this holy monstrosity, this poisoned cornerstone of American cinema? And what do we do about it?”

“‘It was the beginning of my every day walk with death for nine months.’”

“Cultivated not only by white architects of the New South creed but also civil rights activists across class and ideological strata, Atlanta’s image as the ‘city too busy to hate’ crumbled as its young Black residents were abducted and murdered.”

“[T]he sweaty, aromatic ‘Bull Durham’ of old . . . existed even as today’s ‘City of Medicine’ was emerging.”

Why North Carolinians Are Tar Heels

“[T]his more complex tale of the origins of ‘Tar Heel’ shows that it is rooted in hard work by poor people, work that dirtied the bodies of both enslaved Africans and poor whites in the Piney Woods.”

“For American sectionalism was forged by the design of God, the North made into a ‘region of frost, ribbed with ice and granite,’ the South basking in the ‘generous bosom’ of the sun.”

“He played the barn vents at curing time like the stops of an instrument, and went on, cupping his hands around the life he’d inherited as if it were a flame.”