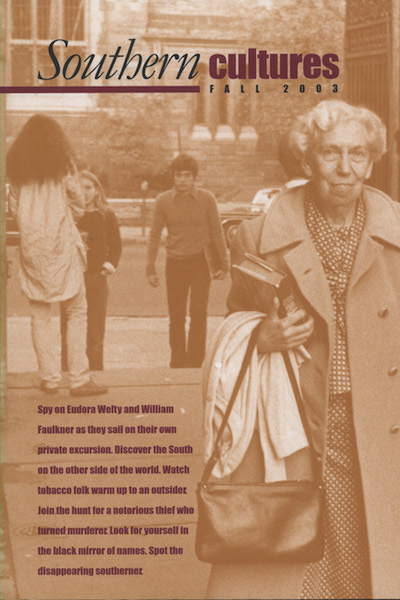 Spy on Eudora Welty and William Faulkner as they sail on their own private excursion. Discover the South on the other side of the world. Watch tobacco folk warm up to an outsider. Join the hunt for a notorious thief who turned murderer. Look for yourself in the black mirror of names. Spot the disappearing southerner.

"One, two, three. I just waded out . . . through the muck. And then I got in his sailboat. Of course I was wet, but you can't ask William Faulkner to wring you out, I guess. It hadn't occurred to me until this minute that I might have."

"The medical costs of dying young appear to ring a heavier charge on the public purse than do the myriad ills of old age. Movies and television portray Big Tobacco as evil personified, the devil, the beast."

"Are southerners a dying breed?"

"Over the next two years, Morris Slate—known forever as "Railroad Bill"—terrorized trains, illegally riding the south Alabama freighters, often robbing them of their goods and occasionally engaging in shootouts with resisting trainmen or police. Eventually, in one of those shootouts, he added murder to his record."

". . . From that pit you can't see much official Washington, just sky and trees and names and people . . ."

"What I most recall is the sun slamming down, ricocheting off tin roofs of mud and plaster houses that duplicated one another endlessly down a thousand bicycle paths, splashes of puddles during the rains, and a hundred women on their way to market."

Hill Folks: A History of Arkansas Ozarkers and Their Image by Brooks Blevins (Review)