"For fifty years I sweat my dues, / wept salt liquor from the blues. / This story I tell wherever I go." —Lenard D. Moore, "A Black Man Tells His Son the Whole Story"

For some cultured southerners, Southern Cultures has published very little when it comes to Arts & Letters. Sure, we’ve shared a story here and there, and we’ve certainly printed author interviews and scholarly analyses, but our forthcoming 21st-century Fiction Issue (available October) marks our first full plunge into the wellspring of creative writing that surrounds us (we live in Chapel Hill after all).

What we are proud of is a long publishing history of poetry, our “Mason–Dixon Lines” feature, under the direction of Michael Chitwood. Below, you can read—and listen to—a few recent highlights from our pages.

Line breaks might not appear true to form on all devices. For optimal reading, please view on a desktop and adjust the size of your browser window.

Around ten, the phone rang. We were all in bed. I was two.
“Joe,” he heard the voice slur, “There’s a fellow with a gorilla

down here. Says he’ll play a hundred bucks to anybody
who goes five minutes with his monkey and walks out

under his own steam.” Daddy said, “Where is he?”
into the black receiver, heavy enough itself to be a weapon.

Between bed and the bazaar, he drank a fifth of liquor
and then had to pay fifty cents more to be foolish.

Daddy wore a coat and tie when he wasn’t playing golf—
even to fight gorillas. The gorilla caught him

by the necktie. Dragged him through peanut hulls,
banana peels, slides of excrement, then tossed Daddy

to the back of the cage and rattled the bars
to scare onlookers and earn his pay. But Daddy

came to and leaped onto the gorilla’s back and grabbed
the bars just beyond all that hair and muscle. Pinned him

to his own cage. Daddy held on until he walked out under his own steam.
He held out his hand for the hundred, but the carney wasn’t having it.

“You had an illegal hold on my gorilla!” the man barked.
“How,” my daddy asked from that night until the day he died,

“can a man have an illegal hold on something with four hands?
Forty years later, I met a boxing chimpanzee named Congo,

a champion in ’57. He’d retired to Tarpon Springs. Someone wrote a book
about him, The Gorilla Show. I have this poem. He outlived Daddy

by at least twenty years. Congo never talked about that night in Martinsville,
ashamed to have been beaten. Not even to me. My daddy on the other hand

won years of telling this story. He taught me to tell it, that it’s a story
worth telling—worth believing—even with no proof but the story itself.

Darnell Arnoult, Writer-in-Residence at Lincoln Memorial University in Harrogate, Tennessee, co-edits drafthorse: a literary journal of work and no work. She is author of the novel Sufficient Grace and the poetry collection What Travels With Us, winner of the Weatherford Award for Appalachian Literature and named SIBA Poetry Book of the Year. She lives with her husband in the Cumberland Gap. 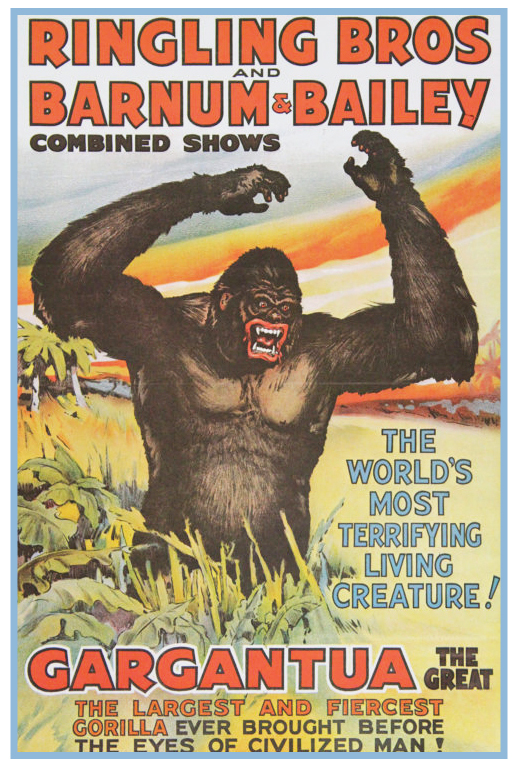 A Ringling Brothers poster from 1938.

My mouth won’t ever forget her skill with a skillet,
my father’s mother, cooking
with her mother’s skillet.

Looking deep into its heavy antique mirror, I see
her wedding day: white dress
and this coal-dark skillet.

Heaven was bacon’s sizzle waking my ears and nose.
Or was it one of her chickens
slow-frying in the skillet?

Her husband once took it hunting without asking:
she said she’d bust his skull
with that upraised skillet.

Fire-born bell whose clapper was a plain dinner fork,
juicy fauna and flora notes
rang out from her skillet.

She hid its teardrop handle inside her strong grip
when pouring red-eye gravy
from one lip of the skillet.

What went into the oven as batter we two mixed
came out as cornbread glory,
steaming amen in a skillet.

Black as her Bible, black as her once-maiden hair,
black as a panther howling
at midnight, this skillet.

I see her funeral day, the kitchen filled with food
not made by her, no flame
kissing the empty skillet.

I say McFee into its circle, hear her savory voice
giving back the family name
from her (now my) skillet.

Michael McFee teaches poetry writing at the University of North Carolina at Chapel Hill. He has published ten collections of poetry (most recently That Was Oasis), a collection of essays (The Napkin Manuscripts), and three anthologies, including The Language They Speak Is Things to Eat: Poems by Fifteen Contemporary North Carolina Poets. 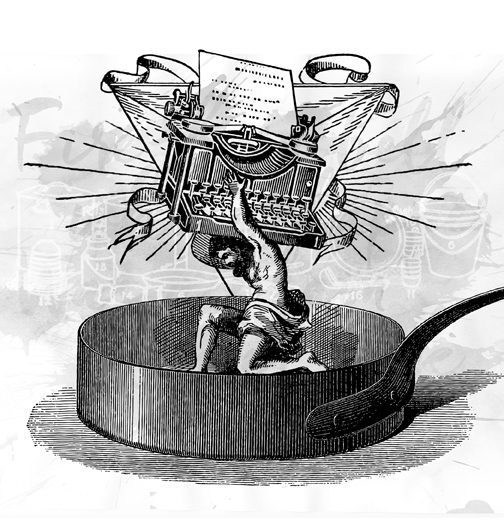 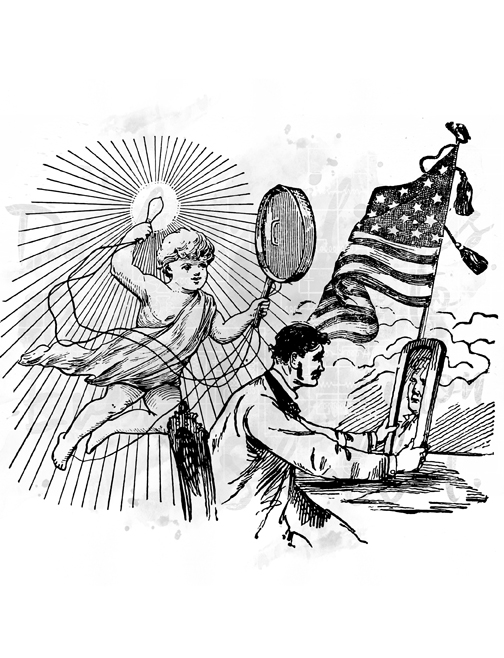 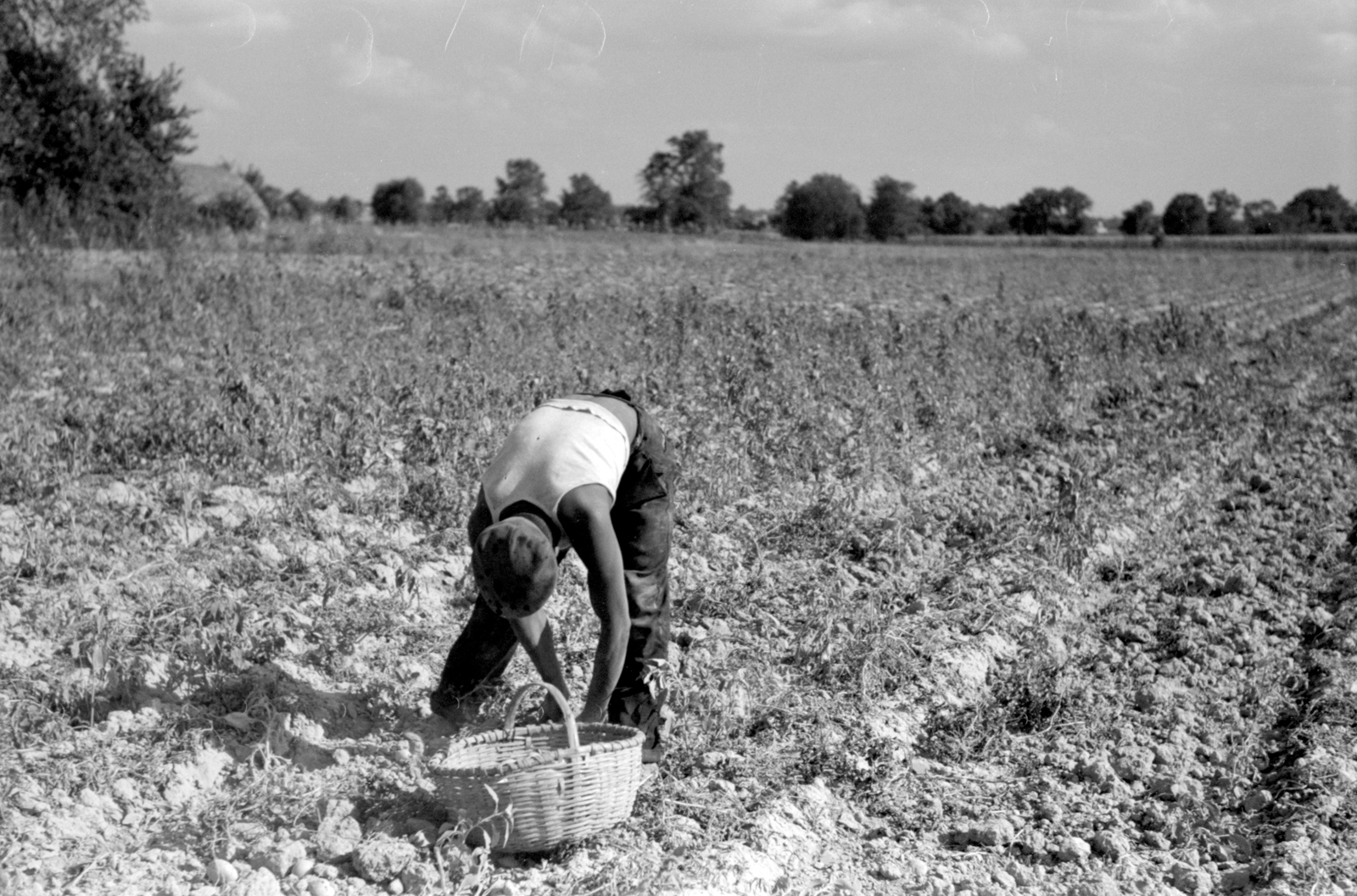 A Black Man Tells His Son the Whole Story

I never had the chance to stay in school.
My daddy said “work,” and his word was rule.
This story I tell wherever I go.

No one denies the truth about my hands
that worked the fields, the roads, the shoeshine stands.
This story I tell wherever I go.

For fifty years I sweat my dues,
wept salt liquor from the blues.
This story I tell wherever I go.

Lord knows it’s so hard living like a hound.
I pray alone, my bony knees strike ground.
This story I tell wherever I go.

I cannot call back how my words spew out,
spill the gritty troubles without a doubt.
This story I tell wherever I go.

I want my story told after I die.
How I pulled peanuts in the fields to dry.
This story I tell wherever I go.

Never had the chance to learn in school,
Say, I never had no chance to stay in school—
Daddy said “work”— He made the golden rules. 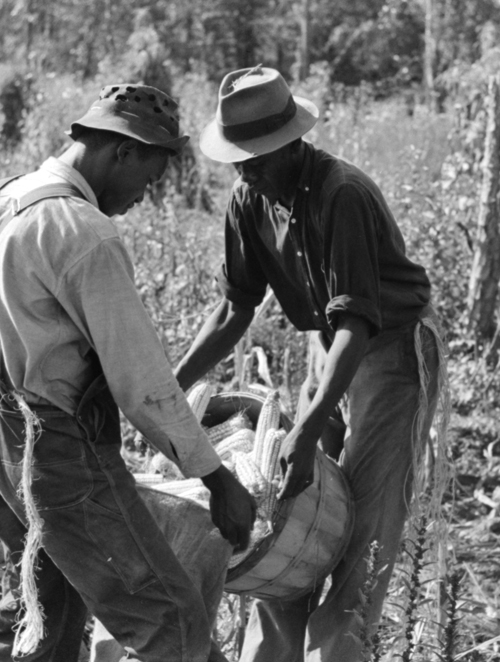 Loose Leaf takes Southern Cultures from print to multimedia. For this edition, Moore reads his poem “A Black Man Tells His Son the Whole Story.”

Lenard D. Moore, a North Carolina native, is Founder of the Carolina African American Writers’ Collective. He is the recipient of several awards, including the North Carolina Award in Literature (2014). He is author of A Temple Looming (WordTech Editions, 2008), and other books. He teaches at the University of Mount Olive.

The header image is a detail of a barn on the ground’s of William Faulkner’s home, Rowan Oak, in Oxford, Mississippi. Photo by Katy Clune.