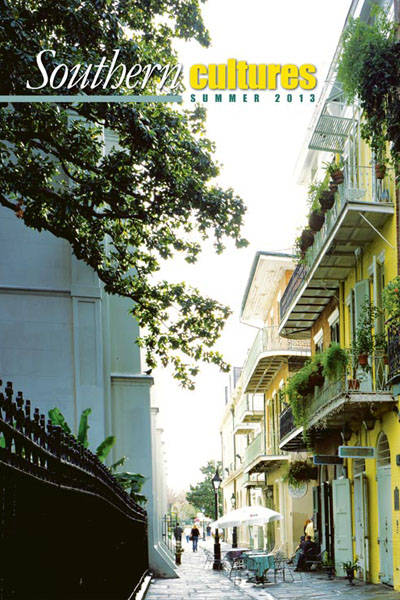 John Reed on Bohemians and Shenanigans in the 1920s French Quarter. Michael McFee on his Inner Hillbilly. Rachel Marie-Crane Williams on a War in Black and White. Crandall Fountain on Intentional Agrarianism. Hardy Jackson on the Poutin’ House. Lee Smith, John Egerton, Doug Marlette and others on the Mystique of Moon Pies. Peter Coclanis and Stanley Engerman on whether slavery would have survived without the Civil War.

"Though the Hard South cannot be evaded, most southerners know there is more to the region than that. The Soft South is here as well, cheek by jowl with its evil twin. Can we have one without the other?"

"Simmons, Aycock, and Daniels used their influence, oratorial skills, and the press to create a rape scare, demonize and humiliate black men and women, spread a violent white supremacist ideology, and reclaim the North Carolina Legislature for the Democratic Party."

"Another attraction was what their Flo Field remembered years later as a 'death-defying platform' built over the roof. Reached through a window, it offered an escape from the stifling heat of a New Orleans attic, and at one party Faulkner unsuccessfully tried to persuade Field to crawl outside—four floors above the street—with him."

Dr. Julius Hibbert: “Yes, I remember Bart’s birth well. You don’t forget a thing like . . . SIAMESE TWINS!” Lisa Simpson: “I believe they prefer to be called ‘conjoined twins.’” Dr. Hibbert: “And hillbillies prefer to be called ‘Sons of the Soil,’ but it ain’t gonna happen!” —The Simpsons, season 8, “Treehouse of Horror”

"How long could slavery have continued to yield adequate financial returns to owners, putting aside any benefits in terms of non-pecuniary factors, such as the consumption of power, prestige, or the love to domineer?"

"Some people were just nuts about them. And they also have a mystique around extraterrestrial stuff."

"There are miracles in this world but they are working-class, Wednesday morning miracles . . ."

"Enter our story's main character. His response to agribusiness is what makes this story unique."

"There, every Wednesday, my Daddy presided over what those assembled called 'prayer meeting,' because that was what it wasn't."