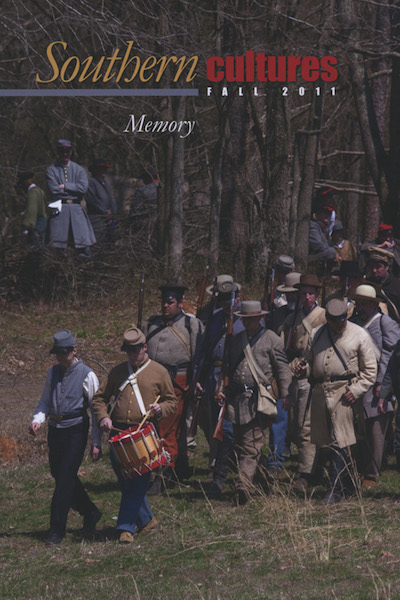 Personal, Public, Historical. This issue of Southern Cultures is devoted entirely to memory: Why we argue so much about Robert E. Lee. Alice Walker, Allan Gurganus, Elizabeth Spencer, Randall Kenan, and more great writers on our favorite films and what they make us remember. Catfish Hunter, the baseball legend and small-town god. World War II-era Appalachia. Growing up in Hot Springs, Arkansas. New poetry from Robert Morgan. What to do about Thomas Ruffin Statue. And “The Grandmother of Appalachian Studies” on the Long Women’s Movement.

"As the Soviets used to joke about their own politically driven histories, 'The present we know; the future is certain. Only the past is unpredictable.'"

"While northerners might appear comparatively apathetic about the memory of the Union cause, white southerners have been tenacious in searching for moral clarity in the past."

"We have two imaginary kingdoms. One, 'the South,' exists primarily in song, oral traditions and folkways, native art and literature. The other, 'Hollywood,' creates mass-produced audiovisual entertainments for American and world audiences, and develops its own mythology."

No Sweat: Memories of Southern Appalachia

"Cooney Simms, the grocer, had a big Philco floor-model radio with push buttons and short wave. Neighbors gathered around when Joe Lewis was fighting. And wasn't he always, this good giant who whipped Adolph Hitler's man Max Schmeling? Static wasn't too bad; one could hear Franklin Roosevelt's fireside chats if they didn't come on the same time as the Grand Ole Opry."

Judge Thomas Ruffin and the Shadows of Southern History

"Ruffin was ideologically sympathetic to the Confederate cause and remained so to his death. 'The power of the master must be absolute,' Ruffin wrote in State v. Mann (1829), 'to render the submission of the slave perfect.' State v. Mann became the most notorious opinion in the entire body of slavery law."

"'Well, of course I remember Pearl Harbor,' my mother says, the tone of her voice adding, What do you think I am, an idiot? She and my grandmother were working in the shop when they heard on the radio that the Japanese had bombed Pearl Harbor. She was five months pregnant with me. It was a Sunday. They'd never heard of Pearl Harbor."

"Jimmy 'Catfish' Hunter pitched for the Oakland Athletics and the New York Yankees and in 1987 was inducted into the Baseball Hall of Fame - all the while maintaining his small-town farming roots. He played every game with the shotgun pellets from a childhood hunting accident lodged in his foot, and natives imagined he held a major piece of them in his cleats."