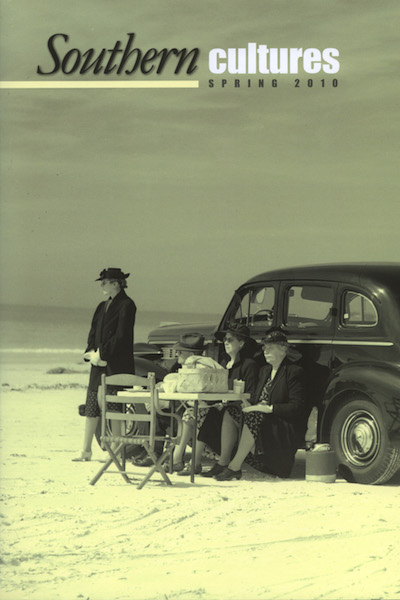 In this issue, we float down the Redneck Riviera with Harvey H. Jackson III and along Roanoke Island with Bland Simpson, we cross the border with Susan Harbage Page, we examine gender and sexuality at the Citadel with Steve Estes, and we consider our sense of place with William W. Falk and Susan Webb.

"Whatever he grows up to be, there is a part of every preadolescent boy that loves to play soldier."

The Rise and Decline of the Redneck Riviera: The Northern Rim of the Gulf Coast since World War II

Longing: Personal Effects from the Border

"Images of a deflated inner tube dropped by the road, a wallet mired, its contents spilling into the mud, footsteps revealed in soft earth, and river-wet clothes wrung, wadded, and cast aside document ordinary things possessed with extraordinary associations of flight, hope, panic, determination, and fear."

"'I'm going to get a blanket party tonight,' he thought, fearing an infamous hazing ritual in which one group of cadets holds down a victim in bed, while another group pummels him. 'Some guys are going to come in here and kick my ass.'"

"I tell the students: 'Act like you've moved to a foreign country. Things, at times, will seem that odd to you. But in time you will learn to think of them as normal.'"

"The warden says fill and you fill it."

"Over on Roanoke Island, any number of homes in Manteo now stand on foundations they were not built upon, thanks to this man's work. There was nothing he couldn't move—why, I believe he once moved a small hotel!"

"Civil War News, as the series came to be known, after its gazette-like report on the back of each card, offered images of brutality and mayhem sufficient to satisfy the most demanding boy's bloodlust."

Billy Graham and the Rise of the Republican South by Stephen P. Miller (Review)

Working Girl Blues: The Life & Music of Hazel Dickens, and Sing It Pretty: A Memoir by Hazel Dickens and Bill C. Malone (Review)