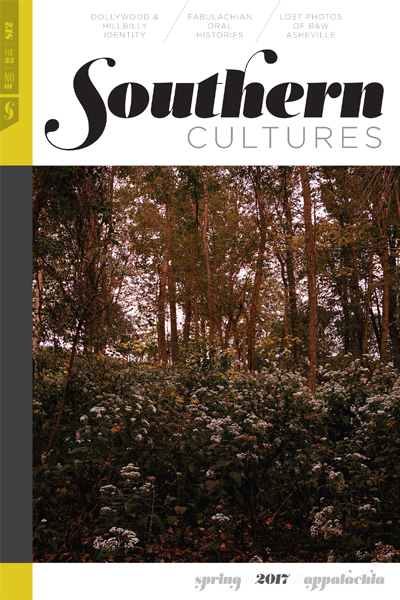 Country Queers in Central Appalachia. Icon and Identity at Dollywood. The Soundscape of Harlan County, U.S.A. A Hindu temple in West Virginia, and more. Our Appalachia issue is guested edited by Elizabeth S. D. Engelhardt.

“Appalachia is still itself, even as it changes, even as so many of us have gotten it wrong.”

Trying to Get Appalachia Less Wrong: A Modest Approach

“Regularly, Appalachia is imagined to need a funeral, to be already gone, to cry out for remembrance.”

"The culture at New Vrindaban, though at odds with the traditional context of Appalachia, does not exist in a vacuum; familiar cultural markers are juxtaposed with the anomalous—traditional Krishna robes paired with steel-toed boots and blue-collar workwear.”

“They portray mountain people like we are all these dumb barefoot hillbillies. I think country people are the smartest people in the world, and I’ve been everywhere.”

“I’d like to say it’s nobody’s fault, but it is. It’s James Dickey’s fault. Or John Boorman’s. Or both.”

"You don’t have to look outside the region to find a place where you belong." —Ivy Brashier

In-Between the Color Lines with a Spy Camera

“I’m not feeling it anymore. I tried. For years, I tried. You know I did.”

The Art of the Saltville Centennial Cookbook

"I took the cookbook home with the same anticipation I would have for a new novel."

"It was as ex-pats that we started talking about creating a textual/visual conversation about our home’s history, our histories within it, and the future that could be."