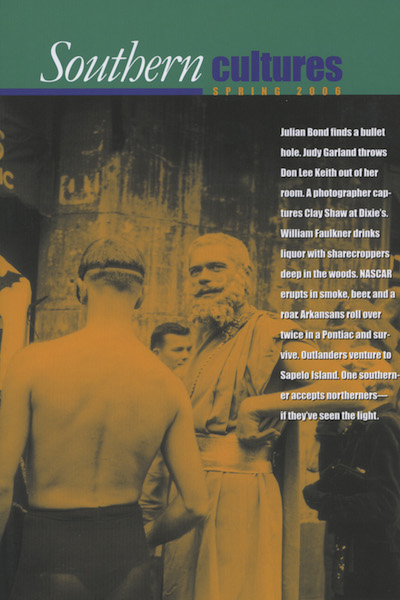 In this issue, we take a ferry down to Sapelo Island, Georgia, with Mary Hussmann, visit the NASCAR racetrack with Lucas Marcoplos, and stroll through New Orleans with Sarah Wilkerson-Freeman and Perry Kasprzak—all before William R. Ferris and Harold Burson introduce us to William Faulkner.

Letters to the Editors: As Long as the Food Is Good

"We even accept transplanted Yankees who have seen the light."

"You can almost always start an argument about southern unity versus diversity."

"What was most moving was that it was here that the ghosts of the people we'd read about jumped out of history and into our lives."

Drafting Away from It All

"A dark secret hid itself under my overt appreciation for barbecue and bluegrass: I know next to nothing about NASCAR."

"Robinson's photographs give us something of an antidote to the smearing and demonization of homosexuals sanctioned and encouraged by government officials for political gain. Before the assassination of a president, before the rise of the homophobic radical right, before AIDS and the crucifixion of Matthew Shepard, very southern gay men in a very southern place happily celebrated their identity and their community. Robinson's photographs capture a history that proudly exposes their liberty, individuality, fraternity, and, above all, their joy."

"He'd go in his back woods and drink himself insensible with some of his sharecropper friends."

"Mr. Falkner quickly admitted he hasn't written his 'best novel,' that it is yet to come."

"I believe that man will not merely endure: he will prevail. He is immortal, not because he alone among creatures has an inexhaustible voice, but because he has a soul, a spirit capable of compassion and sacrifice and endurance."

"My people rolled over twice in a Pontiac one dark night, but survived. . ."

"We just said, 'Whoa, what was that?' and later saw this bullet hole."