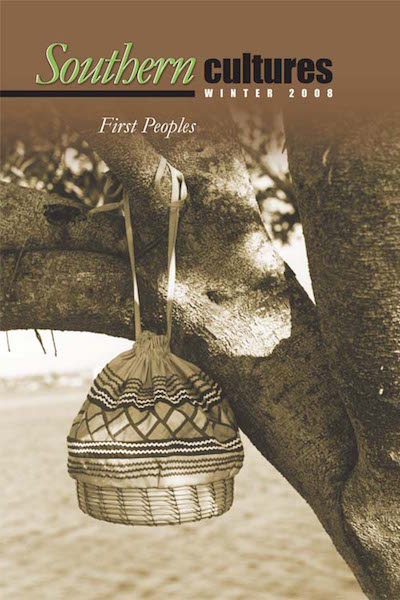 “The South’s first people were neither black, nor white, and they have never disappeared,” Harry L. Watson writes in this issue’s Front Porch. Dig into our special issue on First Peoples.

"The South's first people were neither black, nor white, and they have never disappeared."

The Obituary of Nations: Ethnic Cleansing, Memory, and the Origins of the Old South

"The wilderness settlers thought they were entering as in fact a landscape created and managed by the First Peoples."

"In December 1912, Mississippi representative Pat Harrison stood before Congress and delivered an impassioned speech on behalf of the Choctaw Indians living in his district. "Mr. Chairman,' Harrison announced, 'the Choctaw Indians have always stood with the white men of the South.'"

The Media, the Klan, and the Lumbees of North Carolina

"The Klan was trying to put a damper on the Lumbees. They were not going to come here and run the Lumbees away from their home." —James Jones

"Sanctifying a historic site almost always involves an effort to derive some kind of clear moral message from the events that have taken place there. At New Echota in the early 1960s, that interpretive effort focused on the story of Cherokee Removal, and the moral message was atonement."

Glimpses of a Nearby Nation: The Making of Catawba Pottery with Georgia Harris and Edith Harris Brown

"Like their ancestors for thousands of years, Catawba potters of the late twentieth and twenty-first centuries have continued to adapt their material traditions to ever-changing modern contexts. In the process, they create remarkably contemporary works of visual and tactile art."

"But here we are. You with a bow and arrow. Me in a headdress."

"We wanted to grow our hair long and play in a band. It was very important to us."

"During this time we played with Jimi Hendrix, Led Zeppelin, Procol Harum, Cream, and Jefferson Airplane, and we even backed Bo Diddley and Chuck Berry."

When Heritage Is Hip

"Not all 'cool' identities are equally cool. If the socially constructed identity of American Indian is cool, for most people it is cooler to have Indian ancestry than to be Indian."