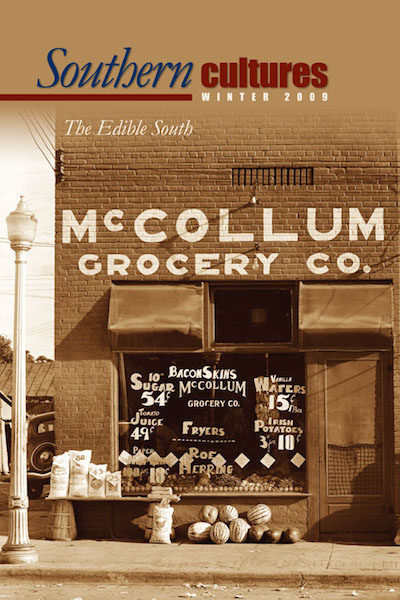 Food for thought: drum head stew on the Eastern Shore of Virginia; girls’ tomato club movements across the South; traditional foodways at the Carrboro Farmers’ Market; the Lupton African American Cookbook Collection in the University of Alabama’s stacks; red gravy in New Orleans; and more.

"We parted in a warm, brotherly agreement about the ambrosial qualities of great down-home cooking, and I drove off shaking my head over people who could share so much around the table yet struggle so bitterly over other things."

"Even as southern populations (and landscapes) have evolved, food and place remain indelibly linked in the southern imagination."

“Peace and a Smile to the Lips”: Favorite Southern Food Dishes

"What you have in your hands isn't just a list of memories and tastes. It's an act of bravery akin to holding a lit stick of TNT."

"'Oh Violet, keep the head on the fish, because I want my eyeballs.'"

by Drew A. Swanson

"The plantation's residents were such voracious drinkers that the remains of wine bottles were the most reliable way to date colonial discoveries during excavation of the old fort site."

Chance Meetings and Back Roads: Making Connections through Food

"He was forced into retirement after Hurricane Katrina, but 'The Professor,' as he's known, is still a walking encyclopedia of New Orleans cocktail history."

"'My cooking is referred to as yo-yo cooking, because the recipes found in this book will make your drawers drop down to your knees and pop back up to your neck.'"

by Beth A. Latshaw