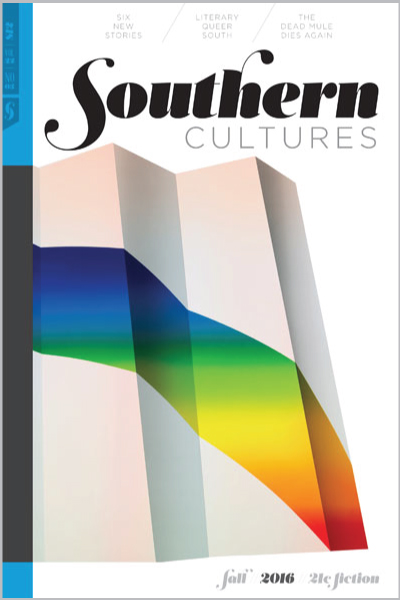 “In this Newest South, novels about tragic mulattoes or doomed aristocrats seem hopelessly out of place, and some writers and critics now speak boldly of “post-southern” literature. At the very least, it’s time to take a look at twenty-first-century southern fiction.”

"The only way he could be lesser-known is if he had never existed at all."

“Standard descriptions of what makes southern literature and culture distinctive (if not ‘exceptional’) are by now familiar to most bibliophiles . . . But such symbols of southernness are fraught with stereotypes, and they rarely tell the whole story.”

"I turned and looked out the car window at a cornfield, at a yard full of scrap lumber and rusted car tops, at the hillsides so full of green they looked almost blue. There was a lot to appreciate. I wished I could."

Mrs. DeVry, Why Do You Cry?

“And the Oracle sayeth, with serious impatience, ‘I have many people to see, Mrs. DeVry. What is your question?’ Mrs. DeVry said, ‘What should my question be?’”

"Is there a 'quality of southernness' in 21st-century southern fiction?" Selections from our author roundtable in the forthcoming 21st-Century Fiction issue follow.

The Girl Who Went Away

“There is one thing I haven’t told.”

So Bored in Nashville

“What else is there to do but follow history? Men go to war to be men worth a damn. Their statues and movies are everywhere, forever.”

“In the predominantly working-class and sometimes rural spaces where Powell’s straight and gay characters cavort together, shoot the shit, or knock each other to the ground, homophobia can exist alongside friendliness and hospitality toward gays, and anti-homophobia can reinforce patriarchy.”

“‘My first memory was a taste. For most of my life I have carried this fact with me not as a mystery, which it still is, but as a secret.’”

“The Rough South offers either the illusion of being clothed culturally, if one identifies with the characters of this literature, or an escape to the ‘real South’ . . . if one believes that the working class retains an authenticity that has been largely flattened in the middle and upper classes.”

“Bright breath of the lamp that lamps our night. Our dirt.”

"I think it’s a criminal thing we do to girls, creating this notion of the ideal mother."

"He had possessed an expectation of bigger and better things than working in a dog kennel back home and being in an ambiguous lukewarm relationship after college."