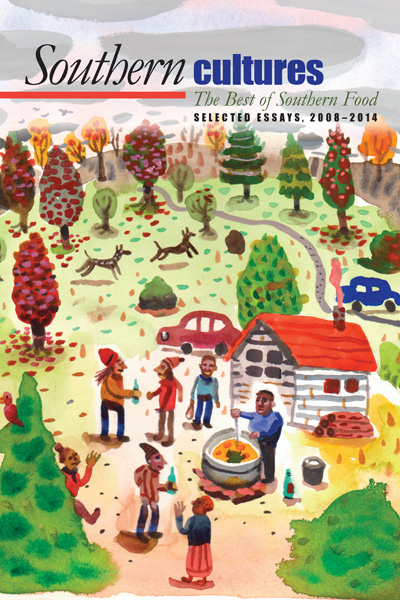 Nourishment and nostalgia, Native ingredients and global influences. Southern Cultures‘s debut “best of” collection gets straight to the heart of the matter: food.

For those of us who’ve debated mayonnaise brand, hushpuppy condiment, or barbecue style—including, in some quarters, whether the latter is a non or a verb (bless your heart)—we present here a collection equal to our passions.

“A recourse that could be depended upon”

"Poor white and black southerners ate molasses in some form with almost every meal."

This essay is excerpted from the Southern Waters issue (vol. 20, no. 3). To view in full, please access via Project Muse.

Every Ounce a Man’s Whiskey?

"It is about the aesthetic of Bourbon drinking in general and in particular of knocking it back neat . . . The joy of Bourbon drinking is not the pharmacological effect of C2H5OH on the cortex but rather the instant of the whiskey being knocked back and the little explosion of Kentucky U.S.A. sunshine in the cavity of the nasopharynx and the hot bosky bite of Tennessee summertime." —Walker Percy, "Bourbon"1